When you connect to HubSpot CRM we sync all of your contacts, along with companies, deals, tickets, line items, products, quotes, and custom objects. You can leverage Ortto’s powerful campaign, reporting, and dashboard features on your customer data from HubSpot.

Read the HubSpot CRM guide below for additional information on integrating with and using HubSpot, and troubleshooting.

This integration process requires having a HubSpot CRM account for which you have administrative permission to install apps.

Use of the journey and playbook actions associated with HubSpot is determined by your Ortto plan.

To connect to HubSpot CRM:

How is the data merged into Ortto?

Data is merged from HubSpot to Ortto on the initial connection. Subsequently, new modified objects are synced approximately every 15 minutes.

The HubSpot integration is initially configured as read only, which means that no data is sent from Ortto to HubSpot.

Should you wish to send data from Ortto to HubSpot, you can create a playbook or journey with Actions that create or update object records, such as an action to change a deal’s status. Learn more about HubSpot actions.

When a person is added to your CDP from the HubSpot data synchronization, if they do not already exist as a contact in your CDP, they are added as a new contact. If you did not determine your HubSpot contact’s email and SMS permission during the integration setup, then any new contacts are automatically subscribed to receive email communications. (New contacts are unsubscribed to SMS by default.)

If a contact synced from HubSpot already exists in Ortto, the contact will not have their email or SMS permissions changed; they will remain as they were set in HubSpot.

Data associated with the default objects and any custom objects you selected are merged into the Ortto CDP. The merge follows the data merge strategy selected during the initial connection with HubSpot. Ortto activities store data based on the objects you chose to be synced during the integration.

HubSpot data is merged in to Ortto approximately every 15 minutes.

HubSpot data is resynchronized when the data source is reconnected and when the data retention limits are adjusted. The resync will not perform a full backfill of data, it will only import changes that occurred since the last Ortto request for HubSpot data.

A resync of the HubSpot data may affect the audiences and campaigns within the CDP by resetting the attributes for the person, and activities, causing a person to potentially re-enter an audience or campaign within the CDP.

What does the data source add to my account?

View Hubspot fields in your CDP

cog icon, then select or clear the fields you want to show or hide. HubSpot fields are indicated with the small HubSpot icon. 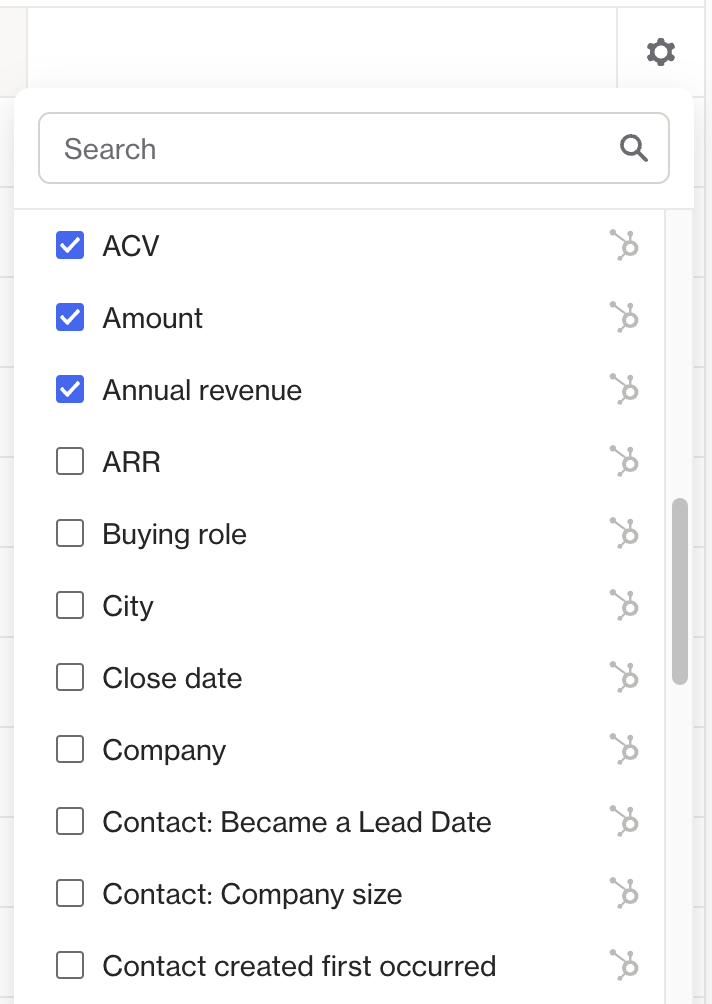 A data source’s view is the administration page where you can:

Learn about how you can use HubSpot with Ortto’s filters, reports, dashboards, campaigns, and coupons to get the most out of your integration under Using HubSpot in Ortto.

For help with common questions or issues you may encounter when using HubSpot as a data source, including backfilling data and syncing Ortto activities to HubSpot, view Troubleshooting HubSpot.